No shows booked at the moment.

About the Songwriter – Jeep Rosenberg 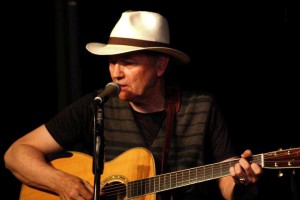 This man is a former Green Beret. He won a talent contest in Korea with his “Tennessee Waltz.” He’s yodeled Jimmie Rodgers songs to Mongol herders in the South Gobi. On a trip to the Balkans as a member of the United Nations, he formed a band called The Kosovo Mad Cowhands. Kris Kristofferson called him a “musician that got away” in his 1992 Austin City Limits performance.

This fascinating man goes by Jeep Rosenberg, born Charles Robert Rosenberg, seems to have enough experiences for seven lifetimes behind him. Now at 68 years old, he’s re-launching a career as a performing songwriter. And as grand prize winner of NSAI’s 2012 Song Contest in the Lyrics-Only Category, he’s got an incredible start.

His winning song, however, doesn’t seem like it would come from the James Bond or Indiana Jones characters that his biography evokes. Instead, it’s an ode to a simple getaway with familiar faces, entitled “Old Friends and California Wine.”

The lyrics are of pure Californian relaxation, bringing to mind tall trees, mountains, and a montage of Willie Nelson and Matthew McConaughey horseback-riding around a grape farm. The repetition of the chorus brings a sense of timelessness to the songwriter’s fond memories:

“I wrote this song out of gratitude for some very supportive old friends,” says Rosenberg. “Their place is sort of a refuge. Sometimes, in a funny way, a friend’s house can feel more like home than your own house does. Maybe they drink a better brand of scotch, or they’re incredibly warm people, whatever it is, you have that sense of belonging.”

Jeep Rosenberg, nicknamed for his father’s vehicle during World War II, has been writing songs and prose since he was a teenager.

“It’s hard to describe a process that’s so drilled into me,” he says of his understated songwriting style. “The only thing I can say at this point is that you have to decide if it’s the kind of song you can push through in a couple of writes or if it’s so precious that you’d capsize it if you rush to finish it. It’s about what the song wants, not what you want.”

“It just takes a lot of time to cultivate the skill, then to develop that instinct for when to stop writing, what to eliminate that may detract from the main energy in a song,” Rosenberg says. “We all have litte metaphors that tickle us, but you may have to kill your children for the sake of the whole.”

For an artist who has been to more countries than most of us could spell, it may be surprising that his music is still so rich in Americana, lacking the stereotypical “world music” vibe. Rosenberg says his folk/country sound isn’t despite his eastern travels, but because of them.

“When I go to Mozambique or Korea or Mongolia, I listen and absorb our differences in music,” Rosenberg says. “But really, it reminds me of my own roots in a way. I can respect the ‘other’ and engage in the ‘other’ but it provides a mirror for me to better see my own musical background and contrast the two.”

Perhaps, Rosenberg says, the attention to detail in his writing is attributable to his love of East Asian culture. “I’ve done a lot of study in East Asian languages and literature,” he says plainly. “In Korean and Chinese poetry, theres a kind of compression that has inspired a lot of my writing. Finding just the right image and the right degree of action, it’s very prevalent in East Asian poetry.”

In fact, Rosenberg is now working with a Taiwanese poet to re-create an “old hillbilly-vaudeville song” with a Chinese twist. “Kind of my own crazy citizen’s diplomacy,” says Rosenberg.

Since being announced NSAI’s Lyric-Only Conest winner, Rosenberg says it’s boosted his credibility, making it far easier to book gigs. Now, he’s working on his next full-length release, and looking forward to his prizes, especially his mentoring sessions with Tia Sellers (“I Hope You Dance” recorded by Lee Ann Womack) and Dottie Moore (“Mile Out of Memphis” recorded by Carl Perkins).

“I’m really looking forward to my trip to Nashville, networking with folks and writing with some great people,” Rosenberg continues. “Onward, onward, right?”